JOMON ― An Early Culture with Pottery

“Jomon” may be the keyword for understanding Japan and imagining the world that lies ahead of us. The term Jomon refers to the first half of the Neolithic era of the Japanese archipelago. During this period, which lasted more than 10,000 years, the Jomon people did not shift to agriculture and animal husbandry, as in other regions of the world, but maintained a culture of hunting, fishing and gathering. This was not because of stagnation or lack of development. The people of this time are considered to have possessed remarkable skills and a rich spiritual world while living in a mature society in harmony with nature. Jomon people are regarded as the direct ancestors of modern Japanese people, and it is therefore not an exaggeration to say that Japanese culture is an extension of Jomon. Three hours from Tokyo by bullet train, you can see those wonders with your own eyes. 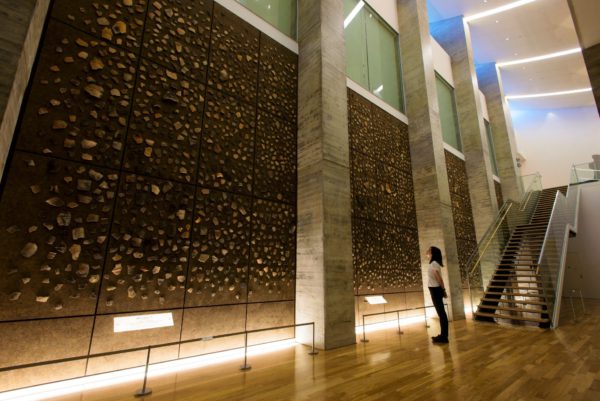 The Sannai Maruyama Site is an archaeological site of a large-scale settlement which thrived from approximately 3,900 BCE and ended around 2,200 BCE. It is one of the largest remains of a settlement from the Jomon era in Japan. Hundreds of people are thought to have lived here at the height of the community. Archaeological finds include more than 800 sites of pit dwellings, as well as earth mounds and storage houses, a long house (32m/105ft in length), and a structure of six massive pillars. 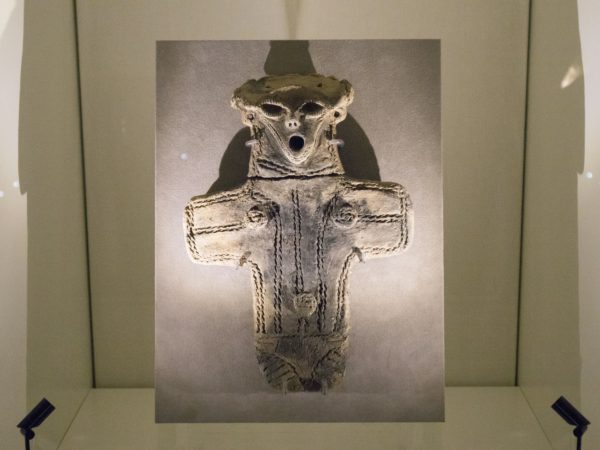 There is also an exhibition center displaying excavated pottery and stonework. There you can borrow a tablet, (an “IT Guide”) to read the descriptions of objects in English or experience the VR version of the site and objects. English-speaking guides are available (Reservation required). The site is 13 minutes from Shin-Aomori Station on the Tohoku Shinkansen Line by shuttle bus, or 30 minutes by taxi from Aomori Airport.

The remains of six massive pillars were found at the site. Those pillars were made from chestnut trees and are estimated to have been as high as 14.7m/48ft. They have been reconstructed in the site. You can also see the bases of the pillars (replica), in the preservation dome nearby. We do not know the purpose of this construction yet. 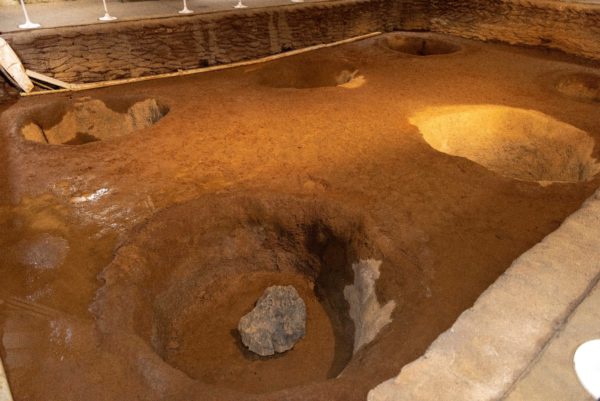 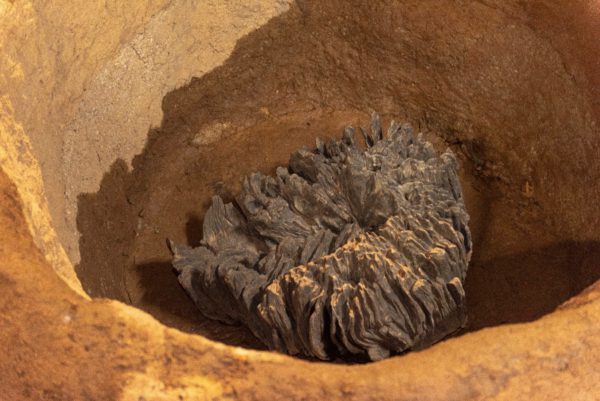 One of the most important discoveries at the Sannai Maruyama Site was an earth mound which containes fragments of pottery, stonework. It merely looked like heaps of earth at first glance, but a series of excavations revealed a great number of ritual instruments, such as large jade beads and Dogu clay figurines. It is now considered to be a burial site for things of importance, as the Jomon people believed in animism and thought spirits dwelled in all things. The trench used for excavation is now open to the public, and you can see the inside of the mound that contains various artifacts. 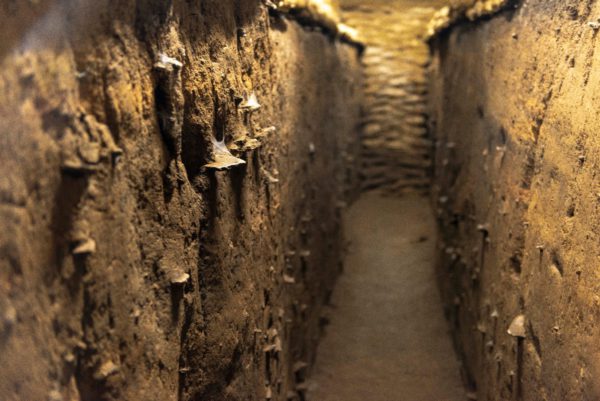 The excavation of the Sannai Maruyama Site began in 1992 and still continues in the surrounding of the park. The site is so vast and the number of artifacts so large that we do not know when it will be completed.

In the Vicinity – The Aomori Museum of Art 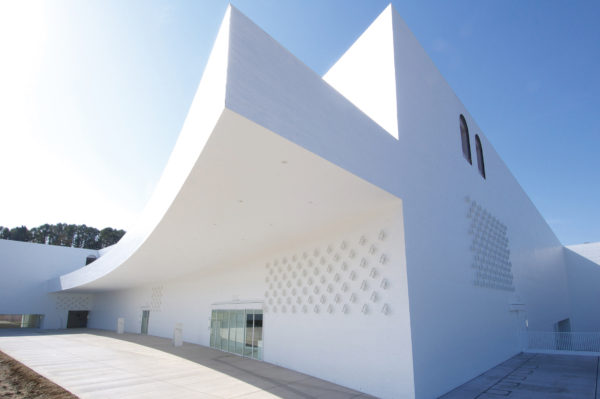 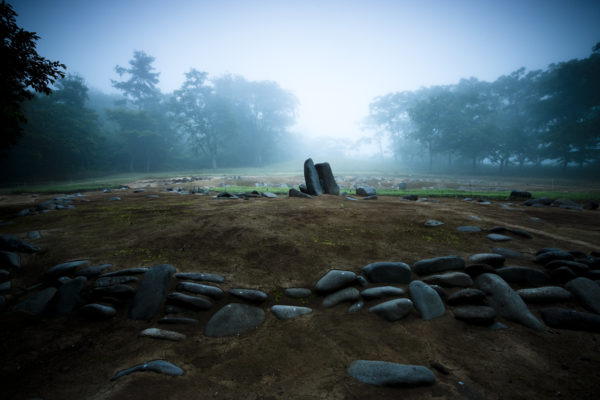 One of the best-preserved stone circles from the Jomon period. It was built around 2,000 B.C., later than the sudden disappearance of the large community at Sannai Maruyama. It has a deameter of 55m/180ft. Each stone weighs around 10-20kg/22-44lb, and was carried to the site from the river, which is about 500m/1,640ft away at the bottom of the hill. These stones are arranged in three concentric circles. The site is considered to have had religious meaning, but its specific purpose is unknown. The site is 20 minutes by car from the Sannai Maruyama Site (30 minutes from Shin-Aomori Station on the Tohoku Shinkansen Line or 15 minutes from Aomori Airport). On the hill, you can also get a beautiful view of the Mutsu Bay.

This is a museum just before the hill of the Komakino Site. The exhibition includes many pottery objects excavated from the Komakino Site as well as other places in Aomori City. Many exhibits have English descriptions. The museum building is a refurbished old elementary school. 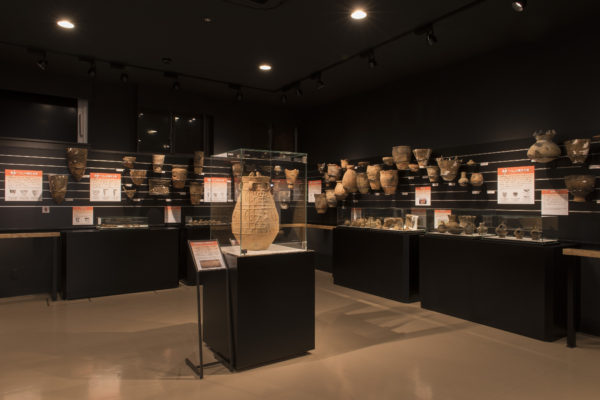 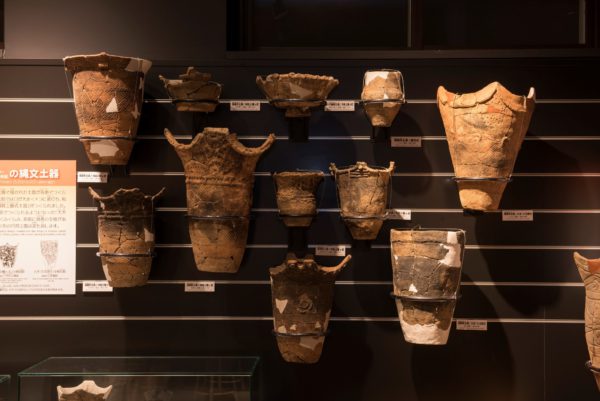 This museum exhibits various artifacts from the Jomon period, and you can see the great craftsmanship of Jomon people. The highlight of the collections is “Gassho Dogu” (a clay figurine with clasping hands, 1,500 B.C.), one of the only five clay figurines that have been registered as National Treasure. You can also take a look at Jomon lacquerware items that are still brilliant red color, lacquered earthenware, and stonework. It is a 20-minute drive from Hachinohe Station on the Tohoku Shinkansen Line (on weekends or on national holidays, a direct bus from the station is available). 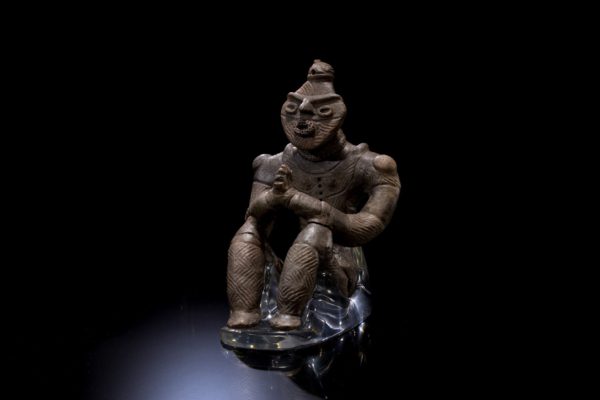 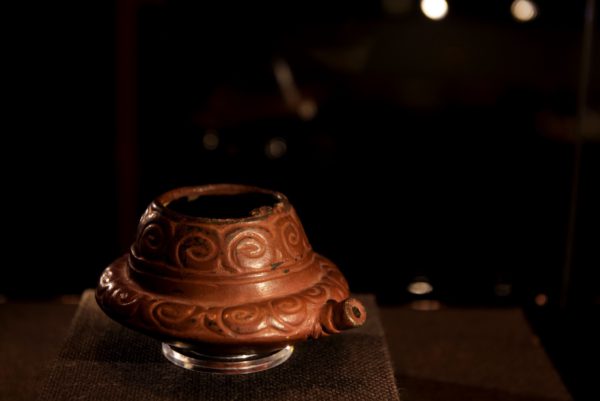 Lacquerware is known to have originated in Japan, and was historically referred to as “Japan” in Europe. Korekawa Archaeological Institution is famous for its exhibition of Jomon lacquerware and lacquered earthenware. It is hard to believe these lacquered combs, lacquered basket and earthenware beautifully lacquered in red and black are from before the common era. 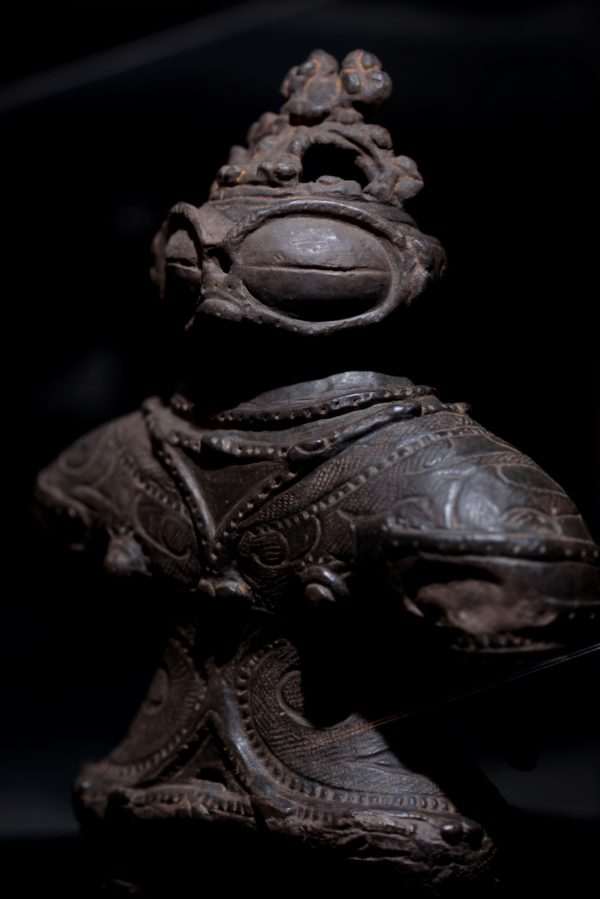 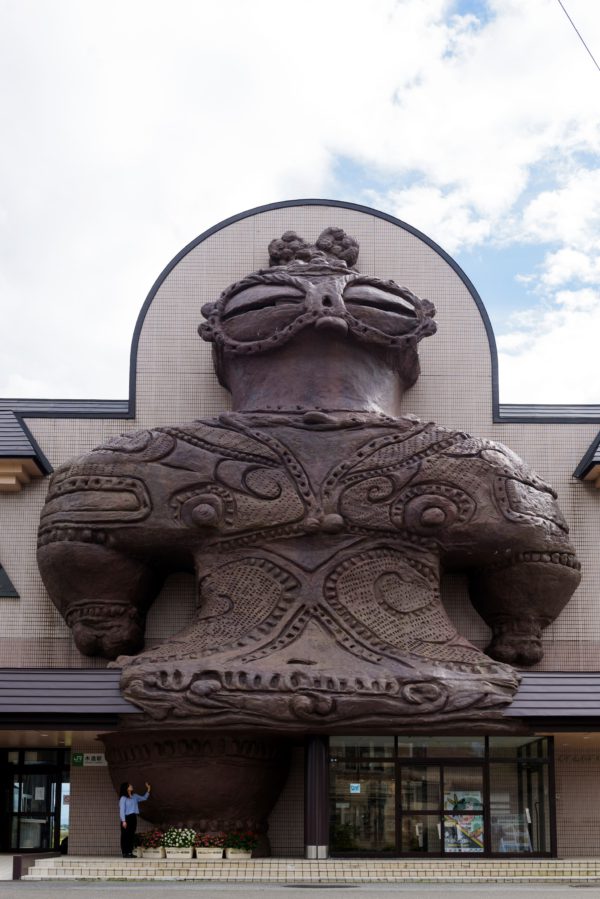 A 15-minute walk from the station will bring you to “Karko”, the Jomon museum. The exhibition includes the goggle-eyed clay figurine (replica) and a reconstructed Jomon house.

At “Karko”, you can also see the bones of a woman from the Jomon period, which were discovered in a shell mound (prehistoric refuse heap of shells) near the Kamegaoka Site. Since Japanese soil is acidic due to volcanic ash, it is rare to find a full ancient human skeleton intact to this day. Her bones were miraculously preserved by calcium because she was buried on a bed of numerous seashells, which allowed us to meet her after more than 5,000 years. 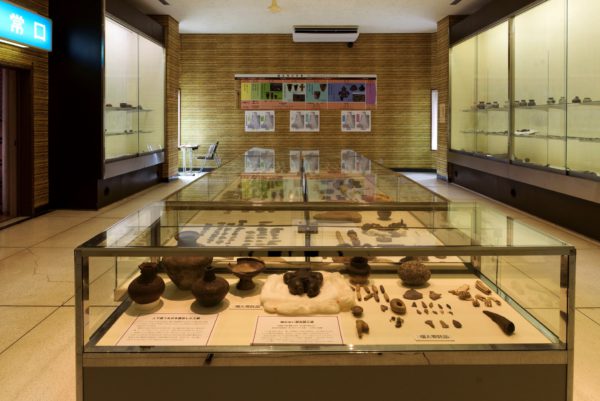 Kizukuri Kamegaoka Archaeological Material Room in the Tsugaru Jomon-kan exhibits fine artifacts and lacquerware excavated from the neighboring area. You can see the local people’s affection towards their ancient culture. It is a 20-minute ride from “Karko”.